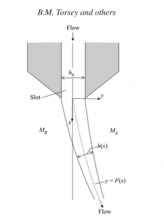 We consider the time-dependent response of a gravitationally thinning inviscid liquid sheet (a coating curtain) leaving a vertical slot to sinusoidal ambient pressure disturbances. The theoretical investigation employs the hyperbolic partial differential equation developed by Weinstein et al. (Phys. Fluids, vol. 9, issue 12, 1997, pp. 3625–3636). The response of the curtain is characterized by the slot Weber number, We0 = ρqV/2σ, where V is the speed of the curtain at the slot, q is the volumetric flow rate per unit width, σ is the surface tension and ρ is the fluid density. Flow disturbances travel along characteristics with speeds relative to the curtain of ± uV/We0 , where u = V2 + 2gx is the curtain speed at a distance x downstream from the slot. Here g is the acceleration of gravity. When the flow is subcritical (We0 < 1), upstream travelling disturbances near the slot affect the curtain centreline, and the slope of the curtain centreline at the slot oscillates with an amplitude that is a function of We0 . In contrast, all disturbances travel downstream in supercritical curtains (We0 > 1) and the slope of the curtain at the slot is vertical. Here, we specifically examine the curtain response under supercritical and subcritical flow conditions near We0 = 1 to deduce whether there is a substantial change in the overall shape and magnitude of the curtain responses. Despite the local differences in the curtain solution near the slot, we find that subcritical and supercritical curtains have similar responses for all imposed sinusoidal frequencies.