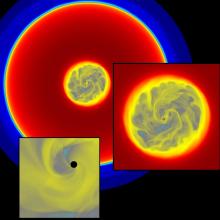 The Harm3D code solves the relativistic MHD equations on arbitrary dynamical spacetimes in arbitrary coordinate systems.  The original code has been used successfully to study accretion disk dynamics in single black hole (BH) spacetimes for many years.  More recently, the code has  been adapted by the RIT group and Noble to use arbitrary dynamical spacetimes and coordinate systems, and has been used successfully to simulate MHD-driven accretion about a merging BBH.  One advantage of Harm3D is that it supports arbitrary curvilinear coordinates, including warped grids.  Importantly, using spherical or cylindrical coordinates minimizes artificial diffusion in disk problems because the gas flow is nearly normal to azimuthal cell faces and tangential to the others.  By contrast, the effective numerical viscosity of a Cartesian grid can lead to significant unphysical angular momentum transport, producing artificial accretion onto the central compact object or binary. Harm3D has been shown to have strong scaling to tens of thousands of cores, and run very efficiently at larger scales on petascale systems such as the NCSA's BlueWaters and beyond.

This project supported by NSF grants: