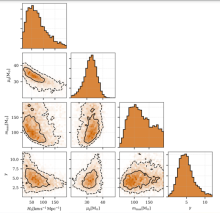 Constraints on the cosmic expansion history from GWTC-3
By The LIGO, Virgo, and KAGRA collaborations
(Sunday, November 7, 2021)
[E-print]

We use 47 gravitational-wave sources from the Third LIGO-Virgo-KAGRA Gravitational-Wave Transient Catalog (GWTC-3) to estimate the Hubble parameter H(z), including its current value, the Hubble constant H0. Each gravitational-wave (GW) signal provides the luminosity distance to the source and we estimate the corresponding redshift using two methods: the redshifted masses and a galaxy catalog. Using the binary black hole (BBH) redshifted masses, we simultaneously infer the source mass distribution and H(z). The source mass distribution displays a peak around 34M⊙, followed by a drop-off. Assuming this mass scale does not evolve with redshift results in a H(z) measurement, yielding H0=68+13−7kms−1Mpc−1 (68% credible interval) when combined with the H0 measurement from GW170817 and its electromagnetic counterpart. This represents an improvement of 13% with respect to the H0 estimate from GWTC-1. The second method associates each GW event with its probable host galaxy in the catalog GLADE+, statistically marginalizing over the redshifts of each event's potential hosts. Assuming a fixed BBH population, we estimate a value of H0=68+8−6kms−1Mpc−1 with the galaxy catalog method, an improvement of 41% with respect to our GWTC-1 result and 20% with respect to recent H0 studies using GWTC-2 events. However, we show that this result is strongly impacted by assumptions about the BBH source mass distribution; the only event which is not strongly impacted by such assumptions (and is thus informative about H0) is the well-localized event GW190814.