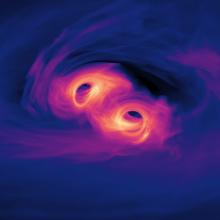 In this paper we continue the first ever study of magnetized mini-disks
coupled to circumbinary accretion in a supermassive binary black hole (SMBBH)
approaching merger reported in Bowen et al. 2018. We extend this simulation
from 3 to 12 binary orbital periods. We find that relativistic SMBBH accretion
acts as a resonant cavity, where quasi-periodic oscillations tied to the the
frequency at which the black hole's orbital phase matches a non-linear $m=1$
density feature, or ``lump'', in the circumbinary accretion disk permeate the
system. The rate of mass accretion onto each of the mini-disks around the black
holes is modulated at the beat frequency between the binary frequency and the
lump's mean orbital frequency, i.e., $\Omega_{\rm beat} = \Omega_{\rm bin} -
\bar{\Omega}_{\rm lump}$, while the total mass accretion rate of this
equal-mass binary is modulated at two different frequencies, $\gtrsim
\bar{\Omega}_{\rm lump}$ and $\approx 2 \Omega_{\rm beat}$. The instantaneous
rotation rate of the lump itself is also modulated at two frequencies close to
the modulation frequencies of the total accretion rate, $\bar{\Omega}_{\rm
lump}$ and $2 \Omega_{\rm beat}$. Because of the compact nature of the
mini-disks in SMBBHs approaching merger, the inflow times within the mini-disks
are comparable to the period on which their mass-supply varies, so that their
masses---and the accretion rates they supply to their black holes---are
strongly modulated at the same frequency. In essence, the azimuthal symmetry of
the circumbinary disk is broken by the dynamics of orbits near a binary, and
this $m=1$ asymmetry then drives quasi-periodic variation throughout the
system, including both accretion and disk-feeding. In SMBBHs approaching
merger, such time variability could introduce distinctive, increasingly rapid,
fluctuations in their electromagnetic emission.