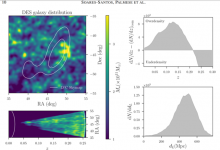 We present a multi-messenger measurement of the Hubble constant H 0 using the binary–black-hole merger GW170814 as a standard siren, combined with a photometric redshift catalog from the Dark Energy Survey (DES). The luminosity distance is obtained from the gravitational wave signal detected by the Laser Interferometer Gravitational-Wave Observatory (LIGO)/Virgo Collaboration (LVC) on 2017 August 14, and the redshift information is provided by the DES Year 3 data. Black hole mergers such as GW170814 are expected to lack bright electromagnetic emission to uniquely identify their host galaxies and build an object-by-object Hubble diagram. However, they are suitable for a statistical measurement, provided that a galaxy catalog of adequate depth and redshift completion is available. Here we present the first Hubble parameter measurement using a black hole merger. Our analysis results in

, which is consistent with both SN Ia and cosmic microwave background measurements of the Hubble constant. The quoted 68% credible region comprises 60% of the uniform prior range [20, 140] km s−1 Mpc−1, and it depends on the assumed prior range. If we take a broader prior of [10, 220] km s−1 Mpc−1, we find

(57% of the prior range). Although a weak constraint on the Hubble constant from a single event is expected using the dark siren method, a multifold increase in the LVC event rate is anticipated in the coming years and combinations of many sirens will lead to improved constraints on H 0.