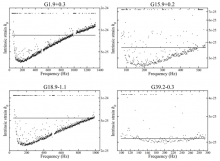 We describe directed searches for continuous gravitational waves (GWs) from 16 well-localized candidate neutron stars, assuming none of the stars has a binary companion. The searches were directed toward 15 supernova remnants and Fomalhaut b, a directly imaged extrasolar planet candidate that has been suggested to be a nearby old neutron star. Each search covered a broad band of frequencies and first and second time derivatives. After coherently integrating spans of data from the first Advanced LIGO observing run of 3.5–53.7 days per search, applying data-based vetoes, and discounting known instrumental artifacts, we found no astrophysical signals. We set upper limits on intrinsic GW strain as strict as 1 × 10−25, fiducial neutron star ellipticity as strict as 2 × 10−9, and fiducial r-mode amplitude as strict as 3 × 10−8.