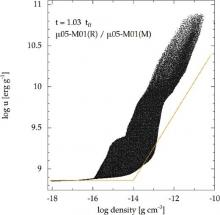 Shaken and stirred: the effects of turbulence and rotation on disc and outflow formation during the collapse of magnetised molecular cloud cores
By Benjamin T. Lewis, Matthew R. Bate
Published in Monthly Notices of the Royal Astronomical Society 477, 4241–4256 (Friday, March 30, 2018)
[Publisher Link] [E-print]

We present the results of 18 magnetohydrodynamical calculations of the collapse of a molecular cloud core to form a protostar. Some calculations include radiative transfer in the flux-limited diffusion approximation, while others employ a barotropic equation of state. We cover a wide parameter space, with mass-to-flux ratios ranging from μ = 5 to 20; initial turbulent amplitudes ranging from a laminar calculation (i.e. where the Mach number, M=0M=0) to transonic M=1M=1; and initial rotation rates from βrot = 0.005 to 0.02. We first show that using a radiative transfer scheme produces warmer pseudo-discs than the barotropic equation of state, making them more stable. We then ‘shake’ the core by increasing the initial turbulent velocity field, and find that at all three mass-to-flux ratios transonic cores are weakly bound and do not produce pseudo-discs; M=0.3M=0.3 cores produce very disrupted discs; and M=0.1M=0.1 cores produce discs broadly comparable to a laminar core. In our previous paper, we showed that a pseudo-disc coupled with sufficient magnetic field is necessary to form a bipolar outflow. Here, we show that only weakly turbulent cores exhibit collimated jets. We finally take the M=1.0M=1.0, μ = 5 core and ‘stir’ it by increasing the initial angular momentum, finding that once the degree of rotational energy exceeds the turbulent energy in the core the disc returns, with a corresponding (though slower), outflow. These conclusions place constraints on the initial mixtures of rotation and turbulence in molecular cloud cores which are conducive to the formation of bipolar outflows early in the star formation process.