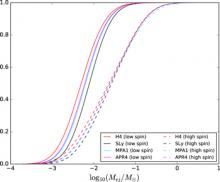 Estimating the Contribution of Dynamical Ejecta in the Kilonova Associated with GW170817
By B. P. Abbott et al
Published in The Astrophysical Journal Letters 850, L39(Friday, December 1, 2017)
[Publisher Link] [E-print]

The source of the gravitational-wave signal GW170817, very likely a binary neutron star merger, was also observed electromagnetically, providing the first multi-messenger observations of this type. The two week long electromagnetic counterpart had a signature indicative of an r-process-induced optical transient known as a kilonova. This Letter examines how the mass of the dynamical ejecta can be estimated without a direct electromagnetic observation of the kilonova, using gravitational-wave measurements and a phenomenological model calibrated to numerical simulations of mergers with dynamical ejecta. Specifically, we apply the model to the binary masses inferred from the gravitational-wave measurements, and use the resulting mass of the dynamical ejecta to estimate its contribution (without the effects of wind ejecta) to the corresponding kilonova light curves from various models. The distributions of dynamical ejecta mass range between Mej=10−3−10−2M⊙ for various equations of state, assuming the neutron stars are rotating slowly. In addition, we use our estimates of the dynamical ejecta mass and the neutron star merger rates inferred from GW170817 to constrain the contribution of events like this to the r-process element abundance in the Galaxy when ejecta mass from post-merger winds is neglected. We find that if ≳10% of the matter dynamically ejected from BNS mergers is converted to r-process elements, GW170817-like BNS mergers could fully account for the amount of r-process material observed in the Milky Way.