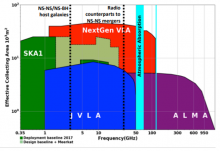 We present the results of a community study aimed at exploring some of the scientific opportunities that the next generation Very Large Array (ngVLA) could open in the field of multi-messenger time-domain astronomy. We focus on compact binary mergers, golden astrophysical targets of ground-based gravitational wave (GW) detectors such as advanced LIGO. A decade from now, a large number of these mergers is likely to be discovered by a world-wide network of GW detectors. This will enable the identification of host galaxies, either directly through detection of electromagnetic (EM) counterparts, or indirectly by probing potential anisotropies in the spatial distribution of mergers. Identifying the host galaxy population of GW mergers would provide a way to constrain the efficiency of various binary neutron star (NS) or black hole (BH) formation scenarios, and the merger timescale distributions as linked to merger rates in early- and late-type galaxies. We discuss how a radio array with ~10x the sensitivity of the current Karl G. Jansky VLA and ~10x the resolution, would enable resolved radio continuum studies of binary merger hosts, probing regions of the galaxy undergoing star formation (which can be heavily obscured by dust and gas), AGN components, and mapping the offset distribution of the mergers with respect to the host galaxy light. For compact binary mergers containing at least one NS and with associated EM counterparts, we show how the ngVLA would enable direct size measurements of the relativistic merger ejecta and probe, for the first time directly, their dynamics.