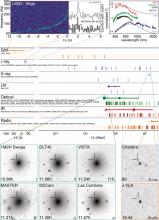 On 2017 August 17 a binary neutron star coalescence candidate (later designated GW170817) with merger time 12:41:04 UTC was observed through gravitational waves by the Advanced LIGO and Advanced Virgo detectors. The Fermi Gamma-ray Burst Monitor independently detected a gamma-ray burst (GRB 170817A) with a time delay of ∼1.7 s with respect to the merger time. From the gravitational-wave signal, the source was initially localized to a sky region of 31 deg2 at a luminosity distance of 40+8−8 Mpc and with component masses consistent with neutron stars. The component masses were later measured to be in the range 0.86 to 2.26 Msun. An extensive observing campaign was launched across the electromagnetic spectrum leading to the discovery of a bright optical transient (SSS17a, now with the IAU identification of AT 2017gfo) in NGC 4993 (at ∼40 Mpc) less than 11 hours after the merger by the One-Meter, Two Hemisphere (1M2H) team using the 1 m Swope Telescope. The optical transient was independently detected by multiple teams within an hour. Subsequent observations targeted the object and its environment. Early ultraviolet observations revealed a blue transient that faded within 48 hours. Optical and infrared observations showed a redward evolution over ∼10 days. Following early non-detections, X-ray and radio emission were discovered at the transient's position ∼9 and ∼16 days, respectively, after the merger. Both the X-ray and radio emission likely arise from a physical process that is distinct from the one that generates the UV/optical/near-infrared emission. No ultra-high-energy gamma-rays and no neutrino candidates consistent with the source were found in follow-up searches.