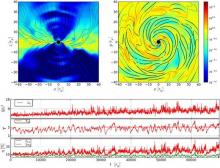 The radiative and jet efficiencies of thin magnetized accretion discs around black holes (BHs) are affected by BH spin and the presence of a magnetic field that, when strong, could lead to large deviations from Novikov-Thorne (NT) thin disc theory. To seek the maximum deviations, we perform general relativistic magnetohydrodynamic simulations of radiatively efficient thin (half-height H to radius R of H/R ≈ 0.10) discs around moderately rotating BHs with a/M = 0.5. First, our simulations, each evolved for more than 70 000 rg/c(gravitational radius rg and speed of light c), show that large-scale magnetic field readily accretes inward even through our thin disc and builds-up to the magnetically arrested disc (MAD) state. Secondly, our simulations of thin MADs show the disc achieves a radiative efficiency of ηr ≈ 15 per cent (after estimating photon capture), which is about twice the NT value of ηr ∼ 8 per cent for a/M = 0.5 and gives the same luminosity as an NT disc with a/M ≈ 0.9. Compared to prior simulations with ≲10 per cent deviations, our result of an ≈80 per cent deviation sets a new benchmark. Building on prior work, we are now able to complete an important scaling law which suggests that observed jet quenching in the high-soft state in BH X-ray binaries is consistent with an ever-present MAD state with a weak yet sustained jet.