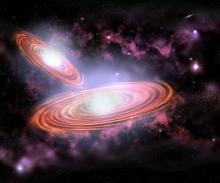 Supermassive black hole mergers are one of the most dramatic phenomena

in the Universe.  For a few hours, they can emit as much power in gravitational waves as all the

stars in the Universe produce in light.  Moreover, they are an important element in determining

the mass distribution of the entire population of supermassive black holes.  However, none has

yet been caught in the act, in large part because they are rare, and no one knows what sort of

light they should emit along with the gravitational waves.  It is the goal of this project to

to predict the light observers should search for in order to find examples.

Intellectual Merit: Over the past ten years, our group has built the

knowledge base and computational methods needed to reach this goal, and we are now ready

to take the final steps.  We have built a ``multipatch" simulation infrastructure to

permit simulation of gas accretion in the approach to merger; to avoid prohibitive

computational cost, it is necessary both to compute the changing spacetime by means

tools permitting separate treatment of subregions within the binary environment.  We

predictions of photon radiation, accounting for the principal radiation mechanisms,

opacities, and photon propagation through dynamical spacetimes.  In the work we proposed,

calculation of events during the merger itself.  The second step is then to take that

phase.  We will use our post-processing machinery to predict EM spectra and lightcurves

throughout all these phases.

Broader Impacts: Because this program fits so squarely within the NSF ``Big Idea"

Windows on the Universe, our research will contribute to one of the major goals of the agency.

In particular, it strengthens the work of the LIGO, NanoGrav, and LSST projects.  In addition,

new field and about very large-scale computation, strengthening the US technical workforce.

Ancillary efforts by the PIs enhance the teaching program at each of their universities.

Both PIs also contribute to public outreach through a variety of channels.