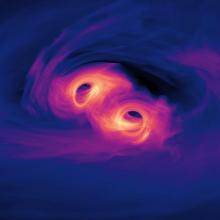 Abstract
Essentially every good-sized galaxy contains a supermassive black hole in its center; because galaxies merge from time to time, it is expected that recently merged galaxies hold two large black holes, which eventually form a bound pair and some time later merge. Because supermassive black hole binaries can often accumulate sizable quantities of gas, they should be bright electromagnetically for a significant time before they merge. Until an orbiting gravitational wave observatory is operational, the best way to discover such systems is by the photons they emit. Therefore this demands having specific features to search for.
A team of researchers from the Rochester Institute of Technology (RIT), NASA Goddard Space Flight Center (GSFC), Johns Hopkins University (JHU), and their international collaborators propose to use the TACC's Frontera system to perform the first realistic simulations of gas surrounding supermassive binary black holes ``en route" to merger, enabling prediction of photon spectral and timing signatures of these binary black holes.
Over the past ten years, the group has built the knowledge base and computational methods needed to reach this goal, and we are now ready to take the final steps. Under current NSF funding, we have completed the development of a ``multipatch" simulation infrastructure to permit simulation of gas accretion in the approach to merger; to avoid prohibitive computational cost, it is necessary both to compute the changing spacetime by means of post-Newtonian and other sorts of perturbative approximations and to create simulation tools permitting separate treatment of subregions within the binary environment. We have also built post-processing tools to transform fluid simulation data into predictions of photon radiation, accounting for the principal radiation mechanisms, opacities, and photon propagation through dynamical spacetimes.
Here, we propose to use the TACC's Frontera system, to study how the accretion from a surrounding circumbinary disk is apportioned between the members of the supermassive black hole binary as a function of the spin and mass-ratio, and how this may change when the separation becomes small enough for relativistic effects to become important. Mass transfer from one member of the binary to the other may play an especially interesting role.
This allocation will allow us to identify of the most distinctive features of the photon emission associated with SMBBHs approaching merger: the bands in which the most electromagnetic power emerges and how they may change over time; the clearest spectral signatures to distinguish merging black holes against the background of stellar light from their host galaxies, and also separate them from AGN; and the radiation produced in jets.
This project will be a stepping stone to enabled LSST and other similar surveys to recognize the transient