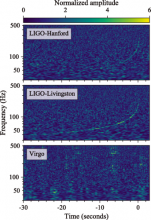 On August 17, 2017 at 12:41:04 UTC the Advanced LIGO and Advanced Virgo gravitational-wave detectors made their first observation of a binary neutron star inspiral. The signal, GW170817, was detected with a combined signal-to-noise ratio of 32.4 and a false-alarm-rate estimate of less than one per 8.0×104 years. We infer the component masses of the binary to be between 0.86 and 2.26 M⊙, in agreement with masses of known neutron stars. Restricting the component spins to the range inferred in binary neutron stars, we find the component masses to be in the range 1.17 to 1.60 M⊙, with the total mass of the system 2.74+0.04−0.01M⊙. The source was localized within a sky region of 28 deg2 (90% probability) and had a luminosity distance of 40+8−14 Mpc, the closest and most precisely localized gravitational-wave signal yet. The association with the gamma-ray burst GRB 170817A, detected by Fermi-GBM 1.7 s after the coalescence, corroborates the hypothesis of a neutron star merger and provides the first direct evidence of a link between these mergers and short gamma-ray bursts. Subsequent identification of transient counterparts across the electromagnetic spectrum in the same location further supports the interpretation of this event as a neutron star merger. This unprecedented joint gravitational and electromagnetic observation provides insight into astrophysics, dense matter, gravitation and cosmology.