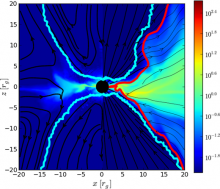 The radiative efficiency of super-Eddington accreting black holes (BHs) is explored for magnetically-arrested discs, where magnetic flux builds-up to saturation near the BH. Our three-dimensional general relativistic radiation magnetohydrodynamic (GRRMHD) simulation of a spinning BH (spin a/M = 0.8) accreting at ∼50 times Eddington shows a total efficiency ∼50 per cent when time-averaged and total efficiency ≳ 100 per cent in moments. Magnetic compression by the magnetic flux near the rotating BH leads to a thin disc, whose radiation escapes via advection by a magnetized wind and via transport through a low-density channel created by a Blandford–Znajek (BZ) jet. The BZ efficiency is sub-optimal due to inertial loading of field lines by optically thick radiation, leading to BZ efficiency ∼40 per cent on the horizon and BZ efficiency ∼5 per cent by r ∼ 400rg (gravitational radii) via absorption by the wind. Importantly, radiation escapes at r ∼ 400rg with efficiency η ≈ 15 per cent (luminosity L ∼ 50LEdd), similar to η ≈ 12 per cent for a Novikov–Thorne thin disc and beyond η ≲ 1 per cent seen in prior GRRMHD simulations or slim disc theory. Our simulations show how BH spin, magnetic field, and jet mass-loading affect these radiative and jet efficiencies.