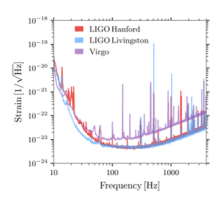 GWTC-3: Compact Binary Coalescences Observed by LIGO and Virgo During the Second Part of the Third Observing Run
By The LIGO, Virgo, and KAGRA collaborations
(Sunday, November 7, 2021)
[E-print]

The third Gravitational-wave Transient Catalog (GWTC-3) describes signals detected with Advanced LIGO and Advanced Virgo up to the end of their third observing run. Updating the previous GWTC-2.1, we present candidate gravitational waves from compact binary coalescences during the second half of the third observing run (O3b) between 1 November 2019, 15:00 UTC and 27 March 2020, 17:00 UTC. There are 35 compact binary coalescence candidates identified by at least one of our search algorithms with a probability of astrophysical origin pastro>0.5. Of these, 18 were previously reported as low-latency public alerts, and 17 are reported here for the first time. Based upon estimates for the component masses, our O3b candidates with pastro>0.5 are consistent with gravitational-wave signals from binary black holes or neutron star-black hole binaries, and we identify none from binary neutron stars. However, from the gravitational-wave data alone, we are not able to measure matter effects that distinguish whether the binary components are neutron stars or black holes. The range of inferred component masses is similar to that found with previous catalogs, but the O3b candidates include the first confident observations of neutron star-black hole binaries. Including the 35 candidates from O3b in addition to those from GWTC-2.1, GWTC-3 contains 90 candidates found by our analysis with pastro>0.5 across the first three observing runs. These observations of compact binary coalescences present an unprecedented view of the properties of black holes and neutron stars.