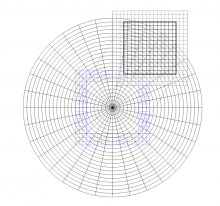 We present an extension of the PatchworkMHD code [1], itself an MHD-capable extension of the Patchwork code [2], for which several algorithms presented here were co-developed. Its purpose is to create a multipatch scheme compatible with numerical simulations of arbitrary equations of motion at any discretization order in space and time. In the Patchwork framework, the global simulation is comprised of an arbitrary number of moving, local meshes, or patches, which are free to employ their own resolution, coordinate system/topology, physics equations, reference frame, and in our new approach, numerical method. Each local patch exchanges boundary data with a single global patch on which all other patches reside through a client-router-server parallelization model. In generalizing Patchwork to be compatible with arbitrary order time integration, PatchworkMHD and PatchworkWave have significantly improved the interpatch interpolation accuracy by removing an interpolation of interpolated data feedback present in the original Patchwork code. Furthermore, we extend Patchwork to be multimethod by allowing multiple state vectors to be updated simultaneously, with each state vector providing its own interpatch interpolation and transformation procedures. As such, our scheme is compatible with nearly any set of hyperbolic partial differential equations. We demonstrate our changes through the implementation of a scalar wave toy-model that is evolved on arbitrary, time dependent patch configurations at 4th order accuracy.