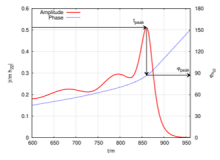 Binary black holes emit gravitational radiation with net linear momentum leading to a retreat of the final remnant black hole that can reach up to ∼5,000 km/s. Full numerical relativity simulations are the only tool to accurately compute these recoils since they are largely produced when the black hole horizons are about to merge and they are strongly dependent on their spin orientations at that moment. We present eight new numerical simulations of BBH in the hangup-kick configuration family, leading to the maximum recoil. Black holes are equal mass and near maximally spinning (|S⃗ 1,2|/m21,2=0.97). Depending on their phase at merger, this family leads to ∼±4,700 km/s and all intermediate values of the recoil along the orbital angular momentum of the binary system. We introduce a new invariant method to evaluate the recoil dependence on the merger phase via the waveform peak amplitude used as a reference phase angle and compare it with previous definitions.
We also compute the mismatch between these hangup-kick waveforms to infer their observable differentiability by gravitational wave detectors, such as advanced LIGO, finding currently reachable signal-to-noise ratios, hence allowing for the identification of highly recoiling black holes having otherwise essentially the same binary parameters.