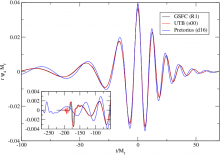 We review the dramatic progress in the simulations of compact objects
and compact-object binaries that has taken place in the first two
decades of the twenty-first century.  This includes simulations of the
inspirals and violent mergers of binaries containing black holes and
neutron stars, as well as simulations of black-hole formation through
failed supernovae and high-mass neutron star--neutron star mergers.  Modeling
such events  requires numerical integration of the field equations of
general relativity in three spatial dimensions, coupled, in the case of
neutron-star containing  binaries, with increasingly sophisticated
treatment of fluids, electromagnetic fields, and neutrino radiation.
However, it was not until 2005 that accurate long-term evolutions of
binaries containing black holes were even
possible.  Since then, there
has been an explosion of new results and insights into the physics of
strongly-gravitating system. Particular emphasis has been placed on
understanding the gravitational wave and electromagnetic signatures
from these extreme events. And with the recent dramatic discoveries
of gravitational waves from merging black holes by the Laser
Interferometric Gravitational Wave Observatory and Virgo, and the
subsequent discovery of both electromagnetic and gravitational wave
signals from a merging binary neutron starts,  numerical relativity
became an indispensable tool for the new field of multimessenger
astronomy.