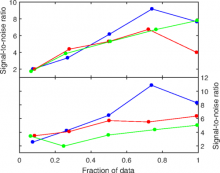 Spinning neutron stars asymmetric with respect to their rotation axis are potential sources of continuous gravitational waves for ground-based interferometric detectors. In the case of known pulsars a fully coherent search, based on matched filtering, which uses the position and rotational parameters obtained from electromagnetic observations, can be carried out. Matched filtering maximizes the signal-to-noise (SNR) ratio, but a large sensitivity loss is expected in case of even a very small mismatch between the assumed and the true signal parameters. For this reason, {\it narrow-band} analyses methods have been developed, allowing a fully coherent search for gravitational waves from known pulsars over a fraction of a hertz and several spin-down values. In this paper we describe a narrow-band search of eleven pulsars using data from Advanced LIGO's first observing run. Although we have found several initial outliers, further studies show no significant evidence for the presence of a gravitational wave signal. Finally, we have placed upper limits on the signal strain amplitude lower than the spin-down limit for 5 of the 11 targets over the bands searched: in the case of J1813-1749 the spin-down limit has been beaten for the first time. For an additional 3 targets, the median upper limit across the search bands is below the spin-down limit. This is the most sensitive narrow-band search for continuous gravitational waves carried out so far.