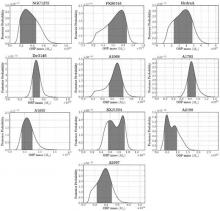 We used broad-band imaging data for 10 cool-core brightest cluster galaxies (BCGs) and conducted a Bayesian analysis using stellar population synthesis to determine the likely properties of the constituent stellar populations. Determination of ongoing star formation rates (SFRs), in particular, has a direct impact on our understanding of the cooling of the intracluster medium (ICM), star formation and AGN-regulated feedback. Our model consists of an old stellar population and a series of young stellar components. We calculated marginalized posterior probability distributions for various model parameters and obtained 68 per cent plausible intervals from them. The 68 per cent plausible interval on the SFRs is broad, owing to a wide range of models that are capable of fitting the data, which also explains the wide dispersion in the SFRs available in the literature. The ranges of possible SFRs are robust and highlight the strength in such a Bayesian analysis. The SFRs are correlated with the X-ray mass deposition rates (the former are factors of 4–50 lower than the latter), implying a picture where the cooling of the ICM is a contributing factor to star formation in cool-core BCGs. We find that 9 out of 10 BCGs have been experiencing starbursts since 6 Gyr ago. While four out of nine BCGs seem to require continuous SFRs, five out of nine seem to require periodic star formation on intervals ranging from 20 to 200 Myr. This time-scale is similar to the cooling time of the ICM in the central (<5 kpc) regions.