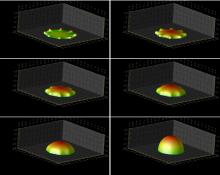 We construct and evolve non-rotating vacuum initial data with a ring singularity, based on a simple extension of the standard Brill–Lindquist multiple BH initial data, and search for event horizons with spatial slices that are toroidal when the ring radius is sufficiently large. While evolutions of the ring singularity are not numerically feasible for large radii, we find some evidence, based on configurations of multiple BHs arranged in a ring, that this configuration leads to singular limit where the horizon width has zero size, possibly indicating the presence of a naked singularity, when the radius of the ring is sufficiently large. This is in agreement with previous studies that have found that there is no apparent horizon surrounding the ring singularity when the ring's radius is larger than about twice its mass.