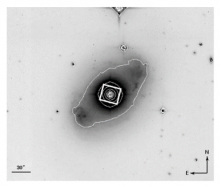 We present a stellar dynamical estimate of the black hole (BH) mass in the Seyfert 1 galaxy, NGC 4151. We analyze ground-based spectroscopy as well as imaging data from the ground and space, and we construct 3-integral axisymmetric models in order to constrain the BH mass and mass-to-light ratio. The dynamical models depend on the assumed inclination of the kinematic symmetry axis of the stellar bulge. In the case where the bulge is assumed to be viewed edge-on, the kinematical data give only an upper limit to the mass of the BH of ~4e7 M_sun (1 sigma). If the bulge kinematic axis is assumed to have the same inclination as the symmetry axis of the large-scale galaxy disk (i.e., 23 degrees relative to the line of sight), a best-fit dynamical mass between 4-5e7 M_sun is obtained. However, because of the poor quality of the fit when the bulge is assumed to be inclined (as determined by the noisiness of the chi^2 surface and its minimum value), and because we lack spectroscopic data that clearly resolves the BH sphere of influence, we consider our measurements to be tentative estimates of the dynamical BH mass. With this preliminary result, NGC 4151 is now among the small sample of galaxies in which the BH mass has been constrained from two independent techniques, and the mass values we find for both bulge inclinations are in reasonable agreement with the recent estimate from reverberation mapping (4.57[+0.57/-0.47]e7 M_sun) published by Bentz et al.