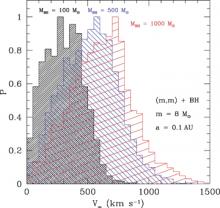 Recent proper motion and parallax measurements for the pulsar PSR B1508+55 indicate a transverse velocity of ~1100 km/s, which exceeds earlier measurements for any neutron star. The spin-down characteristics of PSR B1508+55 are typical for a non-recycled pulsar, which implies that the velocity of the pulsar cannot have originated from the second supernova disruption of a massive binary system. The high velocity of PSR B1508+55 can be accounted for by assuming that it received a kick at birth or that the neutron star was accelerated after its formation in the supernova explosion. We propose an explanation for the origin of hyperfast neutron stars based on the hypothesis that they could be the remnants of a symmetric supernova explosion of a high-velocity massive star which attained its peculiar velocity (similar to that of the pulsar) in the course of a strong dynamical three- or four-body encounter in the core of dense young star cluster. To check this hypothesis we investigated three dynamical processes involving close encounters between: (i) two hard massive binaries, (ii) a hard binary and an intermediate-mass black hole, and (iii) a single star and a hard binary intermediate-mass black hole. We find that main-sequence O-type stars cannot be ejected from young massive star clusters with peculiar velocities high enough to explain the origin of hyperfast neutron stars, but lower mass main-sequence stars or the stripped helium cores of massive stars could be accelerated to hypervelocities. Our explanation for the origin of hyperfast pulsars requires a very dense stellar environment of the order of 106 -107 stars pc-3. Although such high densities may exist during the core collapse of young massive star clusters, we caution that they have never been observed.