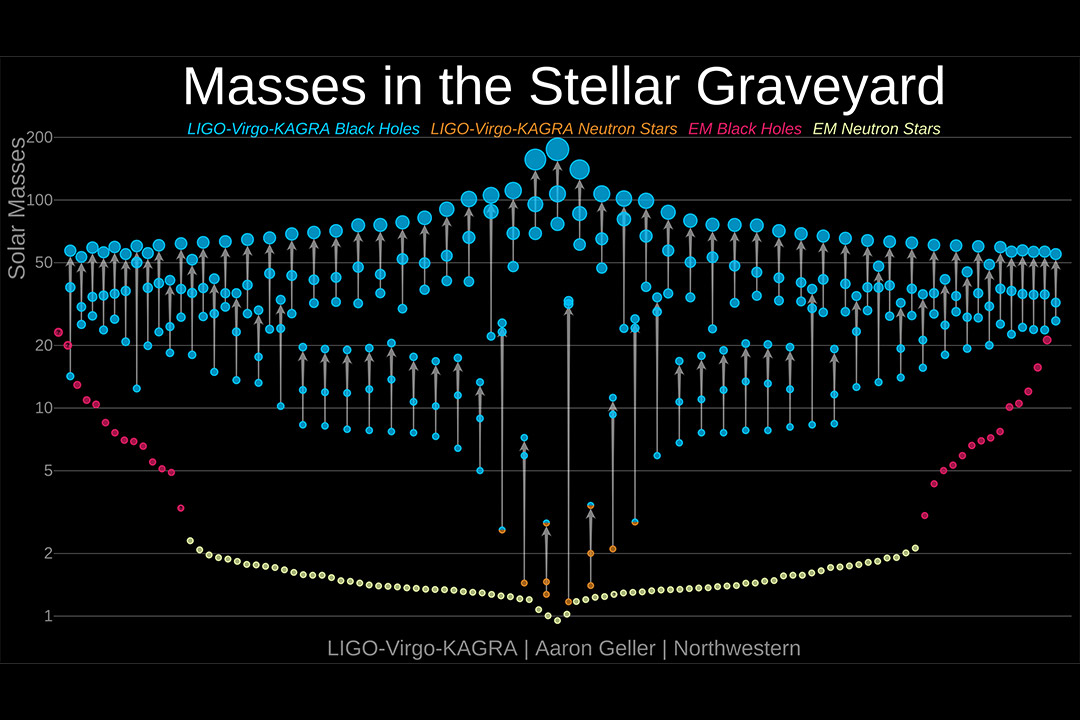 LIGO released a new catalog of results from the second half of its third observing run (O3b), describing 90 gravitational wave events observed since making their first detection in 2015.

The catalog revealed 35 new events, including 32 black hole mergers and at least two black hole-neutron star mergers. Several of the resulting black holes that formed from these mergers exceed 100 times the mass of our sun and are classified as intermediate-mass black holes, which have long been theorized by astrophysicists. These most recent LIGO-Virgo-KAGRA observations confirm that this new class of black holes is more common in the universe than previously thought.

Anjali Yelikar, an astrophysical sciences and technology Ph.D. student from India, contributed heavily to the study by using parameter estimation code to find the mass, spin, distance from Earth, and position in the sky of the black holes and neutron stars detected. She said being part of these discoveries as they happen at an increasingly rapid rate has been exhilarating.

“It’s fascinating because it’s still such a young field,” said Yelikar. “This is a new way to look at the universe. When I was younger, the Hubble Space Telescope was the cutting edge, but now we have developed these detectors that are so big, so sensitive that we are achieving levels that we could never have dreamed of.”

Associate Professor Richard O’Shaughnessy, who made key contributions to the paper outlining the population properties of mergers recorded to date, said, “We now have a better census of the universe and found some really interesting things in the second half of the last observing run. Now that we have observed so many events, we can understand more subtle properties of the population.”

O’Shaughnessy said that by studying 74 of the events detected by LIGO with the highest degree of confidence, they identified several important takeaways. First, the collaboration is able to estimate the merger rate for every type of event observed with the same framework for all. Second, the masses of the neutron stars detected by LIGO are significantly different from those observed previously within our own galaxy. And third, mergers seem to be happening far more frequently at certain masses, which have important astrophysical implications but needs to be confirmed with more sensitive future observing runs.

The LIGO and Virgo observatories are currently undergoing improvements before the upcoming fourth observing run, expected to begin in the latter half of 2022. The KAGRA observatory in Japan will also join the next full observing run. Located deep under a mountain, KAGRA completed a successful first observing run in 2020 but has yet to join LIGO and Virgo in making joint observations. With more detectors, potential events can be located more accurately.

RIT has an extensive group of students, faculty, postdoctoral researchers, and alumni involved in the LIGO Scientific Collaboration, led by principal investigator John Whelan, professor in RIT’s School of Mathematical Sciences. Professor Yosef Zlochower contributed to carefully validating the interpretation of individual events and an analysis of the total population.

For more information, read the population properties and catalog papers on the arXiv website.