WHY WE WROTE THIS

Black holes may seem like exotic, far-off celestial objects – and they are. But they also illustrate, in the starkest way imaginable, the interactions of some of nature's most fundamental phenomena: space, time, light, and mass. 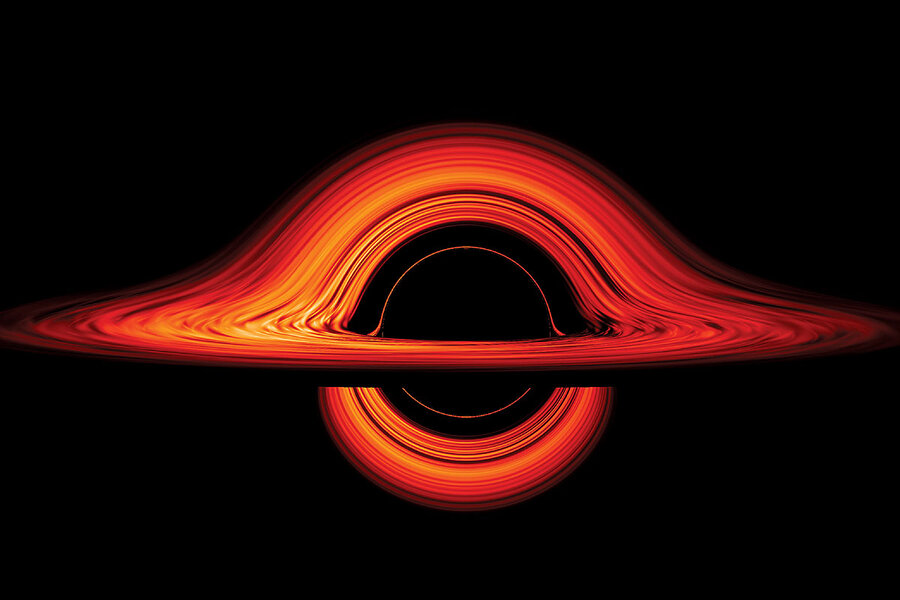 In September, NASA released a simulation of what a black hole would look like, with a glowing disk of hot gas distorted as though in a funhouse mirror.

Last month, NASA released two arresting images of black holes. The first: a simulation of how light bends around a black hole surrounded by a glowing disk of infalling matter. The second: an image, gathered by optical, infrared, and X-ray telescopes on Earth and in space, of three supermassive black holes on a collision course. These images follow a slew of findings that confirm Albert Einstein’s model of gravity, from the celebrated Laser Interferometer Gravitational-Wave Observatory (LIGO) detection of gravitational waves to the image, published earlier this year, of a black hole’s “shadow.”

Yes and no. Because they exert so much gravitational force that even nearby light falls into them, black holes are very black. Compared with a black hole, any black clothing you have is actually navy blue.

Yet black holes are also thought to produce some of the universe’s brightest known lights. These include blazars, the extremely hot jets of matter produced by the gases orbiting supermassive black holes, and gamma-ray bursts, the explosions of high-frequency radiation thought to occur when a black hole swallows a binary neutron star.

And are they really holes?

That question is more complicated because it involves Einstein’s geometric model of gravity, which imagines space and time as a single manifold, called spacetime. According to general relativity, mass “curves” spacetime, causing massive objects to draw together in a gravity-ish sort of way.

Incredibly massive objects, especially when they are very dense, can curve spacetime to the point where an area around it is pinched off from the rest of the manifold.

In one sense, a black hole is “a mathematical solution to Einstein’s equations,” says Manuela Campanelli, an astrophysicist at the Rochester Institute of Technology. “It is a region of space and time that is hidden beneath an event horizon from which nothing can escape.”

Black holes come in all sizes, from the supermassive black holes found at the centers of galaxies to ones just a few times the mass of our sun.

“Nature makes black holes of all masses ranging over a factor of a billion,” says Christopher Impey, a University of Arizona astronomer and the author of “Einstein’s Monsters: The Life and Times of Black Holes.” “Most people aren’t aware that black holes come in such a huge range of sizes.”

How were they discovered?

Black holes were first discovered with math. English thinker John Michell first proposed the idea in 1783 of an object so dense and massive that even light itself cannot escape. His conjectures were echoed 13 years later by the French scholar Pierre-Simon Laplace, who calculated the point of no return for light around a “dark star.”

In 1916 the German physicist Karl Schwarzschild defined this boundary, called the event horizon, in his solutions to Einstein’s field equations.

Even though he developed the theoretical foundations for black holes, Einstein himself was skeptical of their existence.

But in 1939, the same year Einstein published a paper arguing against black holes’ existence, the atomic bomb-maker J. Robert Oppenheimer and one of his students demonstrated mathematically that, once a sufficiently massive star starts collapsing, it will continue to collapse indefinitely.

“Black holes are predicted by the theory of relativity, but they also break relativity,” says Dr. Impey. “So that’s a little awkward.”

These days, interest in black hole astronomy is surging, particularly since 2016, after LIGO detected the first gravitational waves, ripples in spacetime caused by the collision of two black holes some 1.3 billion light-years away. This discovery, which netted the scientists behind it the Nobel Prize in physics the following year, supports Einstein’s theory of general relativity.

Get the Monitor Stories you care about delivered to your inbox.

Earlier this year, the Event Horizon Telescope revealed the first image of a black hole’s “shadow,” a bright ring of light bending around the hole’s intense gravity.

“There’s a lot of fascination for this subject,” says Dr. Campanelli. “We have an image. I think you see more and more people interested in the field.”