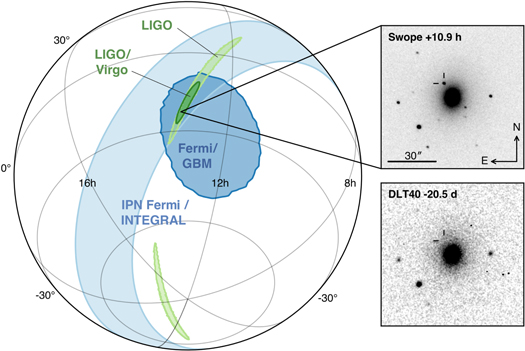 The LIGO and Virgo detectors – run by a collaboration of over 1000 members including a number from RIT's CCRG – have previously detected gravitational waves from several black hole mergers. Now for the first time, they have detected gravitational waves from a new source: the merger of two neutron stars. Being made of matter, unlike merging black holes, two neutron stars  will emit an abundance of light as and after they merge.

On August 17th, 2017, at 8:41am EST, the gravitational waves from this neutron star merger passed through the two LIGO and one Virgo detectors. Within two seconds, the Fermi space telescope observed a short burst of gamma rays – the most energetic form of light – which was later determined to have originated from the same area on the sky. Within hours, ground- and space-based telescopes were able to locate the light from the resulting explosion, narrowing it down to the galaxy NGC 4993, roughly 130 million light-years from Earth, in the constellation Hydra.

This detection marks the dawn of the era of multimessinger astronomy. Combining independent sources of information like this (e.g., light and gravitational waves) has with one event closed multiple open cosmic mysteries (the source of short gamma ray bursts and kilonovae, as well as the speed of gravity), and in the years and decades to come may close many more.