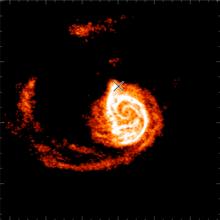 The current cosmological paradigm includes two significant and unknown physical entities called "dark matter" and "dark energy," which are used to model the Universe as we know it. Understanding the distribution of dark matter remains one of the most fundamental problems in astronomy and is the focus of this project. There are many discrepancies between dark matter sub-structure in the existing computer simulations and in observations. There are too few massive satellites relative to simulations, and at low Galactic latitudes there are hardly any Milky Way satellites. This project aims to extract essential information on the dark matter distribution in spiral galaxies by building on the investigator's ongoing work in characterizing galactic satellites from analysis of disturbances in extended disks of hydrogen gas.

Communicating scientific results to a broad audience and promoting diversity benefits the astronomy community and our society at large. This project will be carried out at Rochester Institute of Technology (RIT), which has historically been primarily an undergraduate institution:

(1) Women in Science: The PI will organize regular meetings with visiting women colloquium speakers, with the goal of gathering advice on professional development. Dr. Chakrabarti will also continue participating in the Expanding Your Horizons program, which is geared towards engaging middle school girls in science.

(2) Computational Bootcamp: Every summer, the PI will provide a two-week, intensive computational bootcamp geared towards entering graduate students. The goal of this bootcamp is to serve as a bridge---providing an introduction to computational astrophysics, with hands-on lectures that illustrate the basics of computing and applications to astronomy. The PI will work through simple examples in IDL and Python, and she will encourage women and minority students to attend the bootcamp, and assign mentors for entering students.

(3) Visualization Laboratory: The PI will continue producing 3-D animations of galaxy collisions, which will be showcased in the Viz-Lab at RIT. Three-D movies are becoming an increasingly popular tool to engage the public and are effective in widely disseminating research on galaxy evolution.

The PI will carry out the following technical tasks:

(1) The Milky Way: By matching simulated orbits of the Milky Way satellites with HST proper motions and tidal debris, the PI will derive constraints on the orbital parameters, as well as the initial stellar (and dark matter) distribution of the Milky Way satellites. The PI will produce models that are consistent with both the HI and stellar data of our galaxy, which displays large ripples in the outskirts, a prominent warp, and vertical waves in the galactic disk.

(2) Probing The Dark Matter Halo: Dark matter halos evolve as a function of time, and they may have complex shapes. The PI will determine if the inference of the halo potential from stellar streams is viable for time-varying potentials. By deconstructing the hydrodynamical cosmological simulation ERIS, the PI will study if the distribution of satellites and the morphology of the gas and stellar disk is representative of the Milky Way or local spirals.

(3) Shaking and Rattling The Local Spirals: By simulating a wide range of encounters with sub-halos from cosmological simulations, and mapping to multiple observational constraints in a statistically robust manner using a Monte Carlo Markov Chain analysis, the PI will produce realistic mock catalogs and evolutionary histories of HI disks and their satellite populations.

(4) Strong Spiral Lenses in HI: As the SWELLS sample is a sufficiently low redshift sample of strong spiral lenses (z_avg ~ 0.1) showing visible signs of interaction, the PI will compare and contrast the team's HI analysis and gravitational lensing to derive two independent constraints on the dark matter distribution.