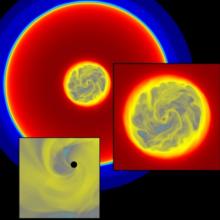 With masses millions to billions times that of our Sun, the strong gravitational influence of supermassive black holes can heat nearby gas so that it outshines an entire galaxy of stars, and slingshot material outward at relativistic speeds. They exist at the centers of almost every massive galaxy, and they may play a significant role in regulating rates of star formation. Our project aims to produce the most realistic simulations to-date of two of the most dramatic events they can make: the inspiral and merger of two orbiting supermassive black holes and the tidal disruption of stars. Both were once thought to be unobservable, but the advent of very large astronomical surveys sensitive to transients have led to the discovery of numerous tidal disruptions and promise the discovery of many mergers. The prospect of extensive observational data make both very hot topics. The great advantage of this program is the opportunity it provides to integrate many existing research programs into a larger community of scientists, students, and the general public. It will foster crossdisciplinary collaborations among undergraduate students, graduate students, postdoctoral researchers and faculty at the Univ. of Tulsa, Johns Hopkins Univ., NASA/GSFC, and Rochester Institute of Technology. Through such a network, our previous highly successful outreach programs will be able to reach an even larger and more diverse audience. For instance, S. Noble (PI) will continue to speak about hot physics topics with the 100-200 high school students that attend the monthly ?Journal Club? event sponsored by his department, and will work with his collaborators on building similar activities at their institutions.

The major goal of this project is to make specific predictions of electromagnetic signatures of circumbinary accretion and tidal disruption events that will allow astronomers to identify, based solely on EM observations, these spectacular events using HST (optical), JWST (IR), Chandra (X-ray), and ISS-Lobster (X-ray), as well as ground based instrumentation such as the Panoramic Survey Telescope and Rapid Response System, which is already in operation, or the planned Large Synoptic Survey Telescope. Such identifications will be a tremendous aid in refining our estimates of the population of merging supermassive black holes, both for estimating the numbers of potential gravitational wave targets and for evaluating the impact of black hole mergers on galaxy evolution. Our simulations on Blue Waters will employ a number of new computational developments needed to achieve the most realistic simulations of these systems to date. They include an adaptive load balancer to evenly distribute runs with nonuniform costs, and a multi-patch system for evolving the magnetohydrodynamics equations on different coordinate domains. It is our intent to make the latter tool publicly available for use in other magnetohydrodynamics codes. Our scientific results will also have a wide-reaching impact on the astrophysical community, both theoretically and observationally. We will release detailed spectra and simulation data for use by observers and future mission development teams. This work comes at a particularly opportune time, as the fields of time-domain and multi-messenger astronomy are growing rapidly.

The report on this award is available here.