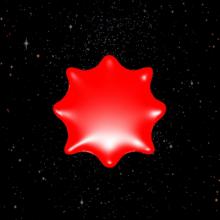 The Center for Computational Relativity and Gravitation in the School of Mathematical Sciences at the Rochester Institute of Technology will purchase a computer cluster which will be dedicated to the support of research in the mathematical sciences. The equipment will be used for several research projects including in particular: the development of new, highly efficient, extremely high accuracy numerical algorithms to solve the non-linear equations of general relativistic magnetohydrodynamics (GRMHD). Magnetohydrodynamics represents a difficult challenge numerically due to the small-scale features introduced by shocks in the fluid material and the magnetic fields. The problem can only be tackled efficiently using higher-order finite differencing methods (greater than fourth-order), including those designed to evolve conservative systems, in conjunction with highly-scalable adaptive-mesh-refinement (AMR) algorithms. The next generation of multi-core processors are expected to have up to 32 individual cores in the near future, and computational nodes with more than 64 cores will soon follow. The challenge, then, is to efficiently parallelize the algorithm on these many-core systems. We will do this by optimizing inter and intra-node communication via a combination of openMP and MPI. The proposed cluster, which will initially have 12 nodes (upgraded to 16 in year 2), each containing 8 cores and 16 GB of RAM, interconnected with a high-speed, low-latency InfiniBand network, will model these future clusters so that we can develop new algorithms. This cluster will act as the central workhorse for developing numerical techniques and performing GRMHD simulations for the next 3 years. Partial support for this award is from PHY, Gravitational Physics program.