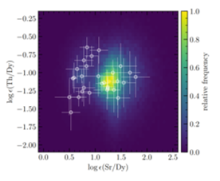 Binary neutron star mergers (NSMs) have been confirmed as one source of the heaviest observable elements made by the rapid neutron-capture (r-) process. However, modeling NSM outflows -- from the total ejecta masses to their elemental yields -- depends on the unknown nuclear equation of state (EOS) that governs neutron-star structure. In this work, we derive a phenomenological EOS by assuming that NSMs are the dominant sources of the heavy-element material in metal-poor stars with r-process abundance patterns. We start with a population synthesis model to obtain a population of merging neutron star binaries and calculate their EOS-dependent elemental yields. Under the assumption that these mergers were responsible for the majority of r-process elements in the metal-poor stars, we find parameters representing the EOS for which the theoretical NSM yields reproduce the derived abundances from observations of metal-poor stars. For our proof-of-concept assumptions, we find an EOS that is slightly softer than, but still in agreement with, current constraints, e.g., by the Neutron Star Interior Composition Explorer (NICER), with R1.4=12.25±0.03~km and MTOV of 2.17±0.03~M⊙(statistical uncertainties, neglecting modeling systematics).