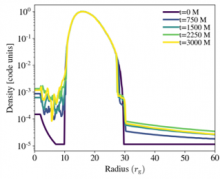 The first binary neutron star merger has already been detected in gravitational waves. The signal was accompanied by an electromagnetic counterpart including a kilonova component powered by the decay of radioactive nuclei, as well as a short γ-ray burst. In order to understand the radioactively-powered signal, it is necessary to simulate the outflows and their nucleosynthesis from the post-merger disk. Simulating the disk and predicting the composition of the outflows requires general relativistic magnetohydrodynamical (GRMHD) simulations that include a realistic, finite-temperature equation of state (EOS) and self-consistently calculating the impact of neutrinos. In this work, we detail the implementation of a finite-temperature EOS and the treatment of neutrinos in the GRMHD code HARM3D+NUC, based on HARM3D. We include formal tests of both the finite-temperature EOS and the neutrino leakage scheme. We further test the code by showing that, given conditions similar to those of published remnant disks following neutron star mergers, it reproduces both recombination of free nucleons to a neutron-rich composition and excitation of a thermal wind.