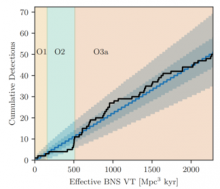 GWTC-2: Compact Binary Coalescences Observed by LIGO and Virgo During the First Half of the Third Observing Run
By Abbott et al
(Monday, March 8, 2021)
[E-print]

We report on gravitational wave discoveries from compact binary coalescences detected by Advanced LIGO and Advanced Virgo in the first half of the third observing run (O3a) between 1 April 2019 15:00 UTC and 1 October 2019 15:00. By imposing a false-alarm-rate threshold of two per year in each of the four search pipelines that constitute our search, we present 39 candidate gravitational wave events. At this threshold, we expect a contamination fraction of less than 10%. Of these, 26 candidate events were reported previously in near real-time through GCN Notices and Circulars; 13 are reported here for the first time. The catalog contains events whose sources are black hole binary mergers up to a redshift of ~0.8, as well as events whose components could not be unambiguously identified as black holes or neutron stars. For the latter group, we are unable to determine the nature based on estimates of the component masses and spins from gravitational wave data alone. The range of candidate events which are unambiguously identified as binary black holes (both objects ≥3 M⊙) is increased compared to GWTC-1, with total masses from ∼14 M⊙ for GW190924_021846 to ∼150 M⊙ for GW190521. For the first time, this catalog includes binary systems with significantly asymmetric mass ratios, which had not been observed in data taken before April 2019. We also find that 11 of the 39 events detected since April 2019 have positive effective inspiral spins under our default prior (at 90% credibility), while none exhibit negative effective inspiral spin. Given the increased sensitivity of Advanced LIGO and Advanced Virgo, the detection of 39 candidate events in ~26 weeks of data (~1.5 per week) is consistent with GWTC-1.