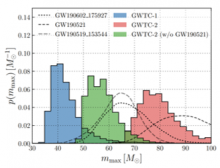 We report on the population of the 47 compact binary mergers detected with a false-alarm rate 1/yr in the second LIGO--Virgo Gravitational-Wave Transient Catalog, GWTC-2. We observe several characteristics of the merging binary black hole (BBH) population not discernible until now. First, we find that the primary mass spectrum contains structure beyond a power-law with a sharp high-mass cut-off; it is more consistent with a broken power law with a break at 39.7+20.3−9.1M⊙, or a power law with a Gaussian feature peaking at 33.1+4.0−5.6M⊙ (90\% credible interval). While the primary mass distribution must extend to ∼65M⊙ or beyond, only 2.9+3.51.7% of systems have primary masses greater than 45M⊙. Second, we find that a fraction of BBH systems have component spins misaligned with the orbital angular momentum, giving rise to precession of the orbital plane. Moreover, 12% to 44% of BBH systems have spins tilted by more than 90∘, giving rise to a negative effective inspiral spin parameter χeff. Under the assumption that such systems can only be formed by dynamical interactions, we infer that between 25% and 93% of BBH with non-vanishing |χeff|>0.01 are dynamically assembled. Third, we estimate merger rates, finding RBBH=23.9+14.38.6 Gpc−3 yr−1 for BBH and RBNS=320+490−240 Gpc−3 yr−1 for binary neutron stars. We find that the BBH rate likely increases with redshift (85% credibility), but not faster than the star-formation rate (86% credibility). Additionally, we examine recent exceptional events in the context of our population models, finding that the asymmetric masses of GW190412 and the high component masses of GW190521 are consistent with our models, but the low secondary mass of GW190814 makes it an outlier.