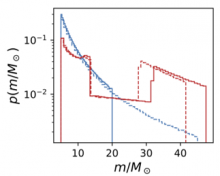 Data from the LIGO and Virgo detectors has confirmed that stellar-mass black holes can merge within a Hubble time, leaving behind massive remnant black holes. In some astrophysical environments such as globular clusters and AGN disks, it may be possible for these remnants to take part in further compact-object mergers, producing a population of hierarchically formed black holes. In this work, we present a parameterized framework for describing the population of binary black hole mergers, while self-consistently accounting for hierarchical mergers. The framework casts black holes as particles in a box which can collide based on an effective cross-section, but allows inputs from more detailed astrophysical simulations. Our approach is relevant to any population which is comprised of second or higher generation black holes, such as primordial black holes or dense cluster environments. We describe some possible inputs to this generic model and their effects on the black hole merger populations, and use the model to perform Bayesian inference on the catalog of black holes from LIGO and Virgo's first two observing runs. We find that models with a high rate of hierarchical mergers are disfavored, consistent with previous population analyses. Future gravitational-wave events will further constrain the inputs to this generic hierarchical merger model, enabling a deeper look into the formation environments of binary black holes.